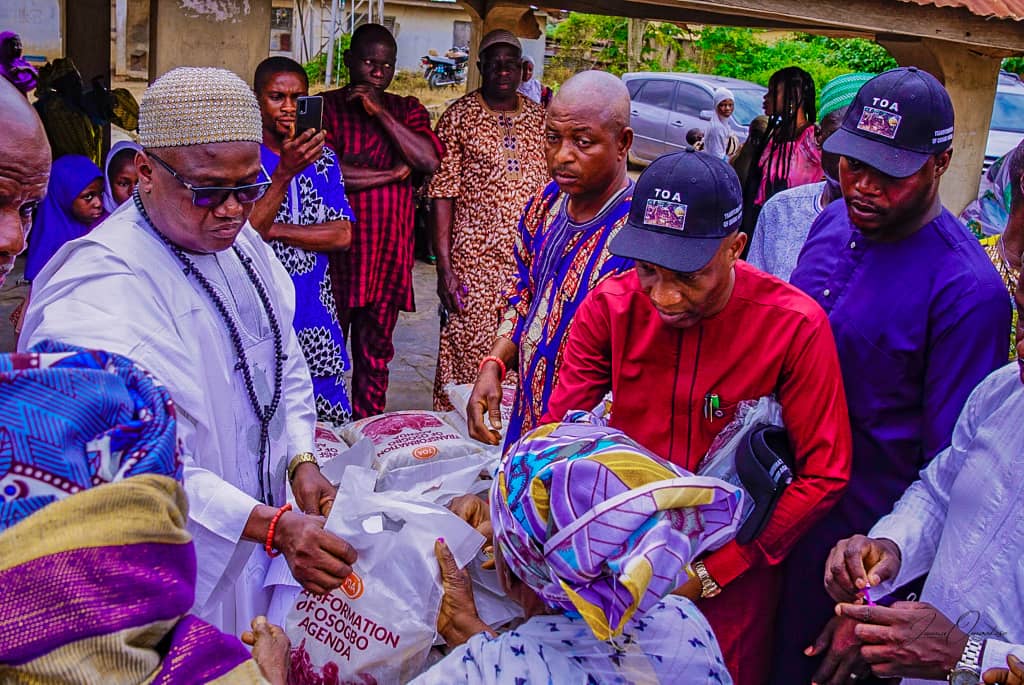 Thousands of Osogbo indigenes benefited from the Food Items Donation for Sallah Celebration by Transformation of Osogbo Agenda TOA organization.

At the food donation which held at the palace ground in the heart of the town for Osogbo indigenes which includes men, women, nursing mothers, pregnant women, the aged among others, the Ataoja of Osogbo, HRM Oba Jimoh Olanipekun Larooye II, appreciated the TOA, organizers for being compassionate about Osogbo indigenes who needs food support for the Sallah Celebration.

Oba Olanipekun said that the Transformation of Osogbo Agenda organization is a model for other reputable indigenous sons and daughters of the land to support the community by bringing succour to the people of the town, as well as to support the youths in the land on education, empowerment, and employment among others.

The Royal father described the humanitarian gesture as laudable, he also urged the beneficiaries to receive the 5kg rice donated in orderly manner, while he prayed for the organizers.

He announced that the non-governmental organization have Board of Trustees BOT and executives, among whom he is the patron, he listed others as Prof. Adeolu Durotoye, Alhaji AbdulGaniyu, Segun Adekunle, Dr Tella Adeniran Rahmon, Engineer Adeniyi Tajudeen, and Mr Oladipo Bakare as Secretary.

In his remarks, Dr Tella Adeniran stated that the TOA Programme is solely for Osogbo indigenes and that the donation will be rotated to reach all beneficiaries.

He further stated that the organizations’ agenda focuses on supporting virtuous Osogbo indigenes, seeking members who can impact lives in the state capital, and lobbying Osogbo illustrious sons and daughters in influential posts to support the agenda of the towns’ development.