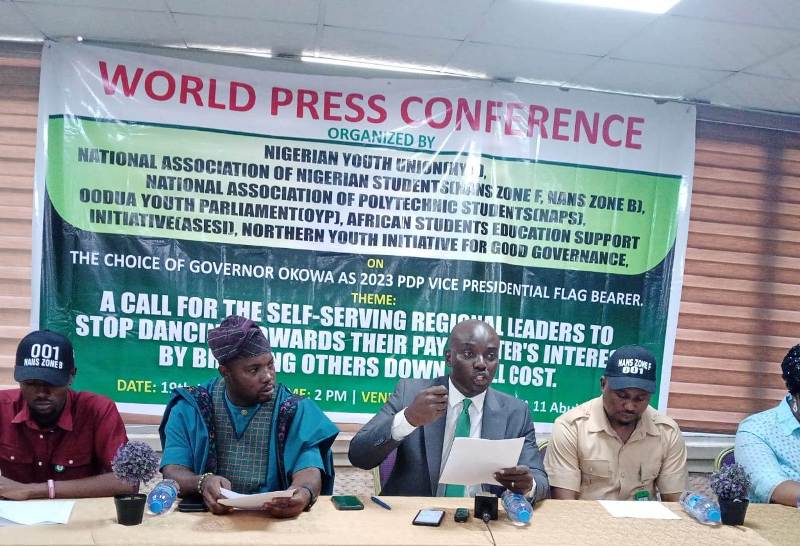 The Nigerian Youth Union (NYU) has said that the emergence of Dr Ifeanyi Okowa as the running mate to the presidential candidate of the People’s Democratic party (PDP) was a right choice.

The President of the union, Chinonso Obasi, disclosed with to newsmen in Abuja on Sunday on the choice of Governor Okowa as 2023 PDP Vice Presidential Flag Bearer.

The theme is tagged:” A Call for the Self-Serving Regional Leaders to Stop Dancing Towards the Pay Masters Interest by Bringing Others Down at all Cost”.

According to Obasi, Okowa is the most qualified candidate for the position of Vice presidential candidate of PDP.

” He was appointed because he has the legislative and executive experiences, great educational qualifications, and other administrative and governance experiences required to run the office of the Vice President.

“The choice of the PDP leaders is right and they won’t regret it as predicted by the regional leaders in the statement they released on Friday,” he said.

Obasi also said that the union had observed that these regional speakers speak only for themselves and tag it the position of their region, while in actual sense, they were expressing their personal opinion simply because things didn’t go their way.

“It has become a trend by these sets of leaders to attack people of high profile with betrayal. They’re self-serving leaders. Apart from press statements, how do Ohaneze, PANDEF, and the rest interact with the major constituents of Southern Nigeria?

” We have uncovered the sponsors of this unwarranted attack and they are people who do not wish Nigeria well.

” We advise that they stop hitting up the polity, particularly the recent plan to cause distractions and confusion in PDP which is preparing to rescue Nigeria.

” As the umbrella body of Nigerian youths, I can assure the regional leaders that Nigerian youths are with the PDP Presidential candidate and his Vice, Atiku Abubakar and Ifeanyi Okowa, respectively, and they would work for their victory in the forthcoming elections,” he added.

He also encouraged the PDP flag bearers to reach out to Nigerians with their policies and programmes designed to restore the lost glory and battered image of the country.