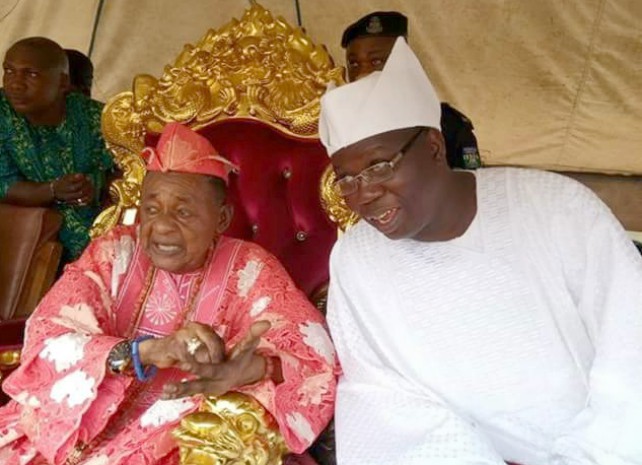 On his inaugural ride in the cultural chariot as the Yoruba generalissimo, he perhaps will first have to contend with that eerie numbness – the odd feeling experienced when euphoria mixes with trepidation. Joy at attaining an epic height; anxiety about meeting very high public expectation that comes with it.

This might then tempt Gani Adams to imagine himself in a Freudian stream of consciousness. His most humble beginnings, and his political re-education in the aftermath of June 12 while Sani Abacha plagued the land. Then he became a fugitive, who was later manacled and paraded like a scum by Obasanjo on a certain day in 2001.

If daring spirit against military dictatorship thrust him into national limelight in the beginning,  the new Aare Ona Kakanfo will soon find he needs more of wisdom to navigate his Yoruba homeland now increasingly ensnared by political treachery. With various factions of the political elites pursuing different interests, the jostle for the warlord’s endorsement by competing suitors will only get more intense.

The new Aare is therefore well advised to apply more gumption in picking the company he keeps to preserve his own personal dignity and save the integrity of the office he occupies. Only then can he tentatively be said to stand a chance of demystifying history and staving what is now commonly termed the Aare curse.

Coming when dark political clouds appear to be gathering over the land with the nation’s ancient fault-lines looking further magnified, curiosity is  bound to be aroused among neighbours as to whether the descendants of Oduduwa are, with the appointment of a war Filed Marshall, already bracing for possible eruption of hostilities in the times ahead. As they say, it is to deter the madman outside that you breed and station one at home.

Such apprehension rooted in fear of a possible throwback to the primitivity of warfare by bow and arrow and fetishism will however be too far-fetched in the 21st century in sub-Saharan African. The only war that is certain and which prospects will always remain is, of course, that of the mind. The locale includes the cultural realm, the intellectual front as well as the political sector.

But if nothing at all, Adams’ rise as Aare will invariably subject the Oodua Peoples Congress (OPC) to a new interrogation as a body, particularly its policing franchise in the South-West communities. Already, he says he will delegate more functions to subordinates but remain the supreme leader. How that works out without casting the body formally as the standing “army” available to enforce the generalissimo’s command should interest the nation’s formal security establishment in the times ahead.

While OPC will increasingly come under pressure now to clean up its act given the greater sense of responsibility the new office imposes on Adams, there is no denying that it has always enjoyed the confidence of a substantial section of the public. If the voice of the authorities has over the years become muted to their operational excesses, it is probably borne out of a sense of guilt. The OPC monster of today is only a product of official failure to device creative policing solutions to rapidly changing communities and demographics.

Part of the enduring elite hypocrisy is that whereas they may deride its undisguised lumpen identity and openly speak ill of the OPC roughnecks in daylight with the most magisterial diction, but in the shadow of the night, they rely on same OPC’s vigilante services – backed with the crudest of munitions, charms and amulets – to secure their tenements against relentless marauders amid police abdication.

Indeed, were opinion survey to be conducted today across the South-West on who they truly believe will be more swiftly responsive between the police and OPC on receipt of distress call at night, the latter may carry the day.

Overall official attitude has no less been dissembling. For instance, Badoo cultists had more or less overrun Lagos suburb of Ikorodu in their homicidal campaign recently with the police looking clueless until OPC weighed in and landed the decisive blow.

Under the Jonathan administration, the group similarly bagged the multi-billion contracts for pipeline-protection in their South-West catchment area on the eve of the 2015 polls in what would unwittingly look more like a state surrender. Government had lost faith in the efficacy of its own institutions of coercion that it resorted to recruiting non-state actors to secure its own valuables.

While a desperate Jonathan acted obviously more with an eye on votes – specifically OPC’s fabled 6 million registered members straddling the South-West and parts of North-Central, that singular gesture perhaps signaled the formal accreditation of the OPC as a bankable franchise by the Nigerian state.

Not surprising, the unorthodox arrangement was summarily annulled after President Buhari upon assumption of office. But stories of oil theft soon became rife again. If the negative SITREP around the Arepo sector ever since is to believe, it is therefore only fair to admit that OPC at least helped to protect critical oil assets.

Of course, it was very convenient for Adams to later rationalize his open flirtation with Jonathan in the context of the convocation of the 2014 national confab and the promissory note to implement its resolutions, some of which are quite consistent with OPC’s extant position on the national question. Doing business with Jonathan on account of the foregoing would then seem to be premised on Lateef Jakande’s self-serving theory that “half bread is better than none”.

But if that were to be conceded, no sophistry can ever excuse the sheer outlawry, the undisguised banditry later enacted when gun-wielding members staged a long procession on Lagos highways for Jonathan on the election eve in 2015.

Taken together, those then expecting finesse or chivalry of OPC in public engagement could not be said to be fully aware of its difficult history and vexatious genealogy. It started as a South-West’s solidarity – if not rebel – movement in the 90s in the aftermath of June 12 against the backcloth of Abacha’s murderous repression. Its early conscripts were mostly urban urchins.

Then, Abiola was in captivity and wife Kudirat in untimely grave.. Wole Soyinka, Bola Tinubu and others were in exile. OBJ was in the gaol over alleged coup plot. Bola Ige hibernated in the gulag as POW (prisoner of war).  Abram Adesanya miraculously survived a rain of assassins’ bullets.. One Admiral was car-bombed to pieces few meters from Lagos airport on mere suspicion of facilitating NADECO secret mails.

I was working at near-by Concord Press then. Till date, I can still hear the echo of the apocalyptic sound of the bomb exploding. Darkness was fast enveloping on the land…

The foregoing climate naturally conditioned the minds of the OPC recruits for the indoctrination that “Yoruba’s liberation” had become a historic necessity. Since the presiding military oligarchy at the centre already classified the proposition of “a sovereign national conference” a taboo, it was too obvious something now had to give. For the OPC, the turning-point however came in 1999 following the coronation of Obasanjo as civilian president by the retreating generals. Obviously, it was meant to be Yoruba appeasement over June 12 and MKO’s eventual mystery death in custody.

Whereas the intellectuals like Frederick Faseun within OPC saw the Obasanjo opportunity as enough compensation and were therefore willing to collaborate and in fact bask in a triumphalism of sorts, the tendency Adams represents remained dogmatic about the sanctity of the original doctrine and was fiercely opposed to any form of accommodation with the new dispensation.

The former seemed to have mistaken the mere ceremony of Obasanjo presidency for the substance of the dream of a just nation they always had.

Meanwhile, realizing there was no more Abacha to fight, the underground army already groomed and indoctrinated over the years had to diversify into vigilante service and reassign themselves as implacable avenger of any Yoruba injury in the South-West and parts of Kogi and Kwara States.

Following another eruption of OPC/Hausa violence in Lagos in 2001, OBJ finally found an opportunity to bring the full weight of state powers against the irritant from provincial Arigidi-Akoko. He was put away in detention for a long time. Newspapers’ front-page photograph of half-clad Adams in handcuffs was perhaps all OBJ needed to send an emphatic message to his foot-soldiers still in the trenches.

It is a measure of Adams’ resilience and focus that he survived OBJ’s bulldozing tactics and would spend the years ahead rebranding himself as a cultural ambassador of the Yoruba nation, amassing not less than fifty chieftaincy titles, equipping himself as an influential political player and, at some point, would appear to have won the long-drawn supremacy battle with now senescent Faseun.

Today, the latter is content with being addressed simply as the “Spiritual Leader” while his younger quarry remains the National Coordinator.

Today, OPC should rank as the most formidable socio-cultural group in the country.

Indeed, those who still speak lowly of Adams are perhaps only the ones fixated on the old memory of the starry-eyed, hungry-looking carpenter who barged into national spotlight in the late 90s. The new Adams is suave and remarkably corporatized. He has vastly improve himself academically by enrolling in the university for a degree in History and acquired requisite political education so much it won’t be an exaggeration to say some of his largely proletarian following now depend on him for their own intellectual nourishment.

This must be the finest moment of the young man from rural Arigidi-Akoko, Ondo State.