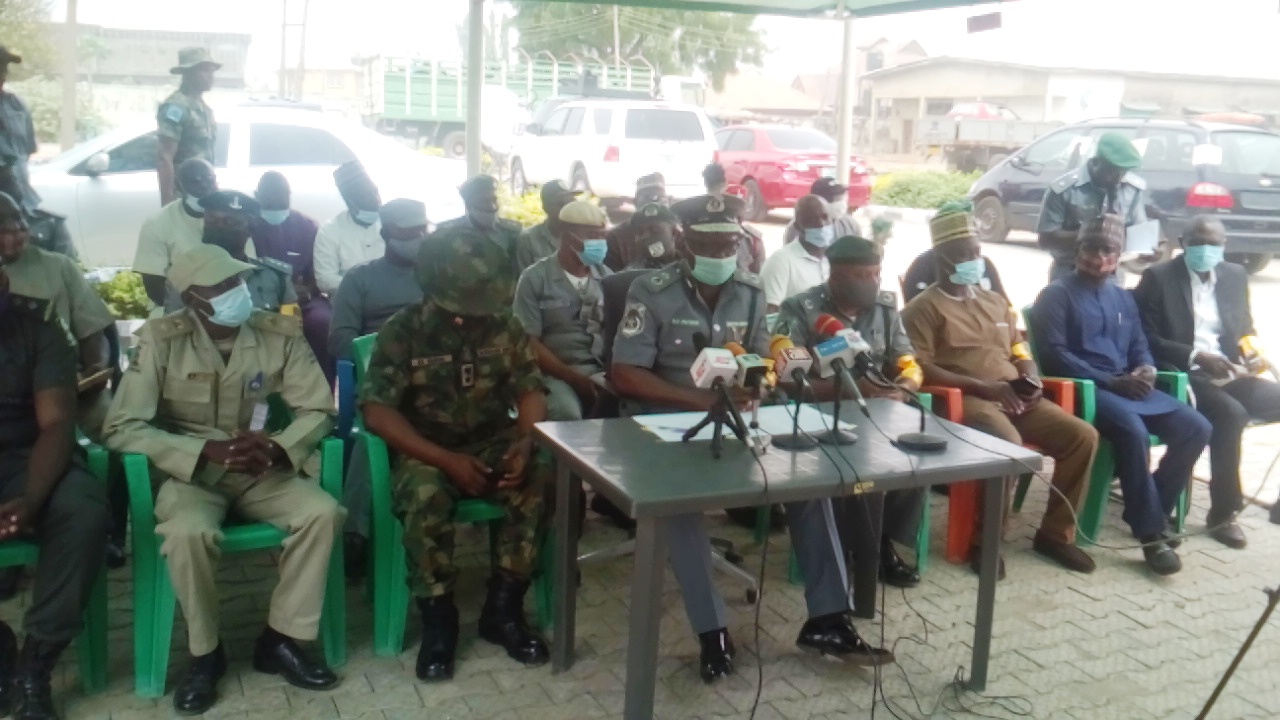 Men of the Nigeria Customs Service, NCS said it had intercepted a thirteen vehicle convoy of contraband along the Okuta border town axis of Kwara state.

The feat, achieved by the Joint Border Patrol Team, North Central Zone, Sector 3 Ilorin, Kwara State was announced by the Coordinator of the team,  Compt. Olugboyega Peters at a press briefing which held at the Area command headquarters of the customs service in Ilorin on Tuesday.

He said that the Sector’s renewed drive in utilization of cutting edge strategies in our anti-smuggling war, had led to a single catch (in one Night) of thirteen (13) Pick-Up Vans Convoy carefully, technically and locally fabricated for the purpose of smuggling activities.

“The results of the action coupled with the Sector’s renewed drive in utilization of cutting edge strategies in our anti-smuggling war, had led to a single catch (in one Night) of thirteen (13) Pick-Up Vans Convoy carefully, technically and locally fabricated for the purpose of smuggling activities.”

The Customs boss reiterated the manner in which vehicles were specially fabricated for the purpose of smuggling in a way that it took the specially trained operatives to discover adding that border closure was not aimed at witch haunting border communities but to strengthen national economy.

“Border Closure is not meant to witch hunt members of any community or individual but aimed at encouraging local farmers; control the inflow of arms and ammunition, illegal Immigrant, stop illicit drugs and all other prohibited goods in and out of the country and improve economy.”

He added that within the space of 18 days, the operation have recorded Forty Three 43 seizures from Mokwa-Jebba, Gwanara, Okuta and other axis of the Sector which include-: 23 Units of Used Vehicles 1,274 Bags of Foreign par boiled Rice, One locally made Gun, a Pistol and 8 Cartridges, 9 Drums of AGO, 242 Jerri cans of PMS,  7 Motorcycles, 7 Jerri Cans of 25litres of Groundnut oil all with a Duty Paid Value (DPV) of the Seized is N 61,002,800.”

He added that five suspected  illegal immigrants were apprehended in possession locally made pistol and cartridges and were handed over to Nigeria Police Force and Nigerian Immigration Service on the 25th March, 2021 for appropriate investigation and prosecution.

He emphasaized the need for the men of the underworld to quit their smuggling activities else his men would not stop at nothing to seize their goods attempted to be brought in illegally without paying appropriate dues.

“I have said this before and I will continue to say it that there is no retreat on the fight against smuggling in whatever guise. We cannot continue to fold our arms and allow every Tom, Dick and Harry come in and out of our country illegally. Trans-border crimes, such as proliferation of small arms and light weapons, ammunition, human trafficking, drugs trafficking, banditry and terrorism are among other security challenges, which we must check.”