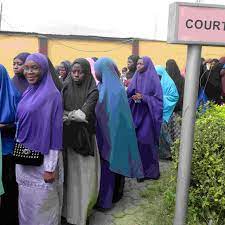 Concerned Christian Elders and Stakeholders of Ijagbo community has re echoed their displeasure over the complicity of Kwara state government in the lingering Hijab crises at the Baptist High School Ijagbo, Oyun Local Government of Kwara State adding that the dust raised is far from being over  blaming the crises on the state government.

The elders, stakeholders in the school had on 25th April, 2022  written a letter addressed to Governor AbdulRahman AbdulRazaq requesting that he re reopen the school that was shut at the wake of the crises on his instruction in the interest of the students particularly, those who would be sitting for the West African School Certificate Examinations (WASCE).

You will recall that there was a bloody clash at the school in February 2022 over wearing of ‘hijab’ by female students which was said to have been masterminded by some Muslim parents who stormed the school to enforce wearing of the religious  apparel and the crises led to the death of one person.

You will also recall that in 2021 there was a large scale arson which claimed lives and wanton destruction of properties to churches in Ilorin, the state capital over the same ‘hijab’ issue leading to the closure of Christian schools by the government.

Seeking a final solution to the crises, the committe resoloves to the problem at tge time, government set up a panel of enquiry to look into the matter as well as an aggreement signed that both government and parties in the ‘hijab’ crisis that any action be  suspended until a ruling of the Supreme Court in an Appeal filed by Christians over forcing wearing the apparel in mission schools is delivered.

Speaking with journalists in Ijagbo, the Christian leaders said the students of the Baptist school this time around had already registered for WASCE and needed to be taken through preparatory coachings by their teachers which a continued closure of the school on the order of the governor would not allow.

They say it was ordinarily expected that in addition to Governor AbdulRazaq’s alleged disregard to the appeal before the Supreme Court against the ruling of the lower Court of Appeal on Kwara State Christian schools’ ‘hijab’ crisis and a stay of execution to the effect, he (the governor) went ahead in 2021 asked the willing students to wear ‘hijabs’ in mission schools.

The elders added that not only did the governor cause Baptist High School Ijagbo to be closed uneccessarily long, he also paints the picture of non-insensitivity to the fate of students particularly those who would be sitting for their Senior Secondary School Leaving Certificate examinations.

They accused the government of acting against an agreement and wondered why even after a panel of enquiry set up by the governor submitted its report over a month ago, all the governor still did was to set up another White Paper Panel to look into the first report apparently, to deliberately keep the Baptist High School Ijagbo perpetually under lock and key.

In the letter of appeal dated 25th Aoril, 2022 and said ti be sent through a courier service to the governor, the elders said; “our appeal has become compelling at this time because the final year students are due to sit for their WAEC Exams, sometime next month (May 2022). It is bad enough that these innocent students and our future as a community, State and Country have lost enormous learning opportunities due to the closure of this school.

“They are now at the risk of not sitting for their WAEC Exams. This is a most undesirable situation which your Exxellency, as father of these children and indeed, the State, should not allow to persist any longer.

“We reckon that history that history will not be king to any administration that allows such avoidable fate to visit these otherwise innocent children at this time”.

Meanwhile, journalists were told that final year students of the Baptist High School who had registered for NECO SSCE (a national examination) gathered around their school recently to do thumb printing for the examination which some muslim brothers kicked against threatening another round of crisis .

According to the elders, some Muslim parents who had aleeady registered their wards in different schools for the WASCE kicked afainst Christian students thumb printing even ourside the school premises insisting that governmrnt had closed the school already and threatened to cause another mayhem for what they termed opening of the school.

They  alleged that their action was as if governmebt was obviously acceding to their protestation, “it  directed the said students to go to Governmrnt Secondary School Offa to take the impending examination” an sction which they felt was not done in good faith.

The added that though the Ijagbo Christian community however expressed its preference for GSS Ipee but was shocked that “most Muslim students had  gone to other schools to register for the examination thus leaving mostly Christian students on the class roll”.

“It is apparent therefore that the intention of those Muslim friends  who interestingly are non residents of Ijagbo is to make Chrsitian students miss the examination”, they further alleged.