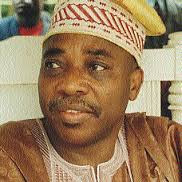 Former Ekiti State Deputy Governor, Chief Abiodun Aluko, has rejected the claim of the incumbent Deputy Governor, Prof. Kolapo Olusola, that he (Aluko) was not loyal to Governor Ayo Fayose during his tenure between 2003 and 2005.

Aluko in a statement on Monday in Ado-Ekiti said his insistence that Ekiti people must not be defrauded in the N1.4 billion poultry project during Fayose’s first tenure led to his exit from the government.

The former deputy governor was reacting to Olusola’s claim in an interview with a national daily (The Punch) of Sunday, September 17 “that all former Deputy Governors of Fayose during his first term except the one that resigned were unfaithful and disloyal to him.”

Rubbishing Olusola’s allegation, Aluko maintained that he was loyal and faithful to Fayose while serving under him as the number two citizen but was “never a stooge or boot-licker.”

Putting the records straight, Aluko said his problems with Fayose began when the latter directed him through a one-page memo to release N1.4 billion to his friend, Gbenga James, for a poultry project which had not been approved by the State Executive Council or budgeted for.

He added that the then government had neither carried out feasibility studies nor conducted the profitability assessment. According to him, there was no bill of quantities to determine the actual project cost to determine whether it was inflated or not.

The ex-deputy governor explained that he forwarded a memo to Fayose to allow the project go through the due process but his former boss was angry with the advice which he saw as an “affront.”

Aluko disclosed that he objected to the release of such a huge amount because “it was a verbal agreement between two friends” and awarded to a company that had no file with the government.

He explained: “The Economic and Financial Crimes Commission (EFCC) eventually got wind of the project when the governor and his friend who was both the project initiator, consultant, and contractor all rolled into one had a disagreement over the sharing of the loot.

“The EFCC investigated the project and discovered that it was a monumental fraud to fleece Ekiti State of its scarce resources and took Mr. Governor and his friend to court.

“The case is still in court as confirmed by the EFCC just last week. If standing for following due process on the side of Ekiti people from being defrauded of the staggering sum of N1.4 billion by insisting proper procedure must be followed amounts to unfaithfulness or disloyalty, I have no regrets parting ways with such a governor.”