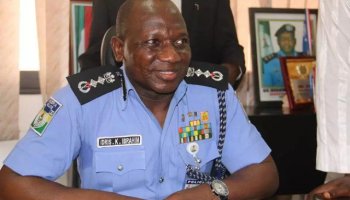 A middle aged man, Chukuma Okoro has said that he armed robbery gang to pay his wife’s dowry.

Okoro who was among suspects paraded by Ondo State Police Command on Wednesday  said he had been living with his wife until lately when the wife returned to her family, with the family demanding that the dowry should be paid before the wife returns to his house.

He said that he joined the robbers gang in order to satisfy his wife and also to pay the N300,000  demanded by the wife’s family as bride price.

In his words: “It is my wife that pushed me into it, I have never stolen in my life, this is the first time, she ran away from my house since three weeks ago and she has been begging me that she wants to come back so I started looking for money to pay her dowry before.

“There is no way I can get the N300,000 to pay her dowry from the vegetables business I am doing and that is why I tried to rob and this is the first time I will be doing it.”

Speaking on Okoro’s arrest, the Police Public Relations Officer (PPRO) in the state, Femi Joseph, explained that Okoro was arrested with three other suspects who specialised in robbing with motorcycle known as okada.

He listed the three other suspects as: Ezenwa Raphael, Chukwudi Oruma and Thomas Onofuapo.

According to the police image maker, Okoro and members of his group were among the armed robbers who had been terrorising the state in the recent time.

He explained that Okoro who had been on the trail of a sales girl who was on her way to the bank to deposit a sum of N500,000 to the bank while Okoro who was on okada forcefully took the money from the girl.

He said the girl however, ran after the motorcycle and pushed Okoro down in the process before raising alarm.

Okoro, however, pointed a pistol to the gun and tried to shoot her twice while the gun failed to work and this
attracted the people in the area who arrested the suspect.

The PPRO added that the pistol and five live carriages were found on Okoro when he was arrested.

Joseph said: “ Okoro attacked a sales girl who was going to the bank to deposit a sum N500,000. As he was struggling to collect the money from her, the girl raised the alarm that attracted the passerby who arrested him”

The police spokesman said all the suspects would soon be charged to court, adding that the command would not relent in the fight against crimes and criminality in the state.